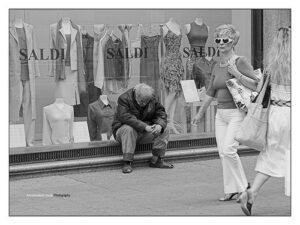 I have to do current events assignments for my government class each week so I always choose the news-paper as my main source. I picked up the October 5th New York Post and was flipping through it to find an interesting article relating to society or government. Despite the fact that I wanted to get the assignment over with for the week, I looked through the paper to find a few more stories out of boredom. The cover story was about a helicopter tour gone wrong; the next story was about a man who had gotten robbed, it seemed like nothing out of the ordinary, so I overlooked it as I was flipping through the paper once again. At some point, I had been reduced to read the robbery story. The story was about how clothing mogul, George Bardwil was robbed at gunpoint in his own home while hosting a party. The robbers made off with a $300,000 value of money and jewelry.

Bardwil reacted to the incident by saying, “If it had been $5 million or $6 million of jewelry, I’d be upset.” Although he also mentioned that the stolen items are just trinkets and that his life is more valuable, which is an understandable reaction, it makes me angry, as a person of the middle class, to think that $300,000 could be so worthless to him. In my neighborhood, many people struggle for financial support because of obstacles such as living situations, immigration status, and income, and to think that Bardwil thought nothing of what was taken. People are in need but people like Bardwil are not putting these things to good use.

I explored a possibility of Bardwil’s mentality. Maybe he is indifferent because he thought that these people may really need it desperately enough to resort to robbery. But then again, if Bardwil’s intentions were to help, shouldn’t he just give instead of waiting for someone to steal from him? This led me to think of how some upper class Americans take advantage of their status and look at everyone else as inferior to the point where it becomes a matter of inconsideration for the diversity of help needed. People do not wish to be in situations where they struggle to make ends meet, these people deserve support. For example, illegal immigrants, many do not come here just for fun and to experience what America is like and to party but they have families back at home in their countries where they are poverty stricken. This sounds like some cliché story of an immigrant but this is the reality. Would you want to have to leave your family behind and go to a place a million miles away, where the government doesn’t respect you let alone your American next door neighbors who are raising children who take advantage of their free education by dropping out of school, where you cannot trust the people that you work for because they can make you do the work and choose not to pay you because they are American citizens and you’re not?

After reading this article in The New York Post, ironically, I later had a conversation with my friend about immigrants and immigration in America after we joked about how we should write a letter to Bardwil asking for money (it’s better than robbing him). We also brought up some great points, it is not fair that these people in the government and Congress are supposedly representing us, yet illegal immigrants are unaccounted for. That makes all of the difference though because in the Bronx, where I live, I know for a fact that the majority of the students in my school are illegal immigrants. There’s such a stigma attached to the word illegal immigrant itself, often times people refer to illegal immigrants as being illegal aliens. What do they mean by “illegal aliens” anyway, when some of these same people have lived here from infancy, consider themselves to be American, work in this country for this country, pay taxes, follow the laws, and work hard with the solemn goal to support themselves and their families just to get by? Yet, these same people who service our America illegally cannot even get so much as their driver’s license because they are not citizens. It is not as if they do not care, the same “illegal aliens” which America has raised made advances with the Dream Act but have failed to get Congress to pass these laws to give them rights and a voice in society. They have lived among us for so long but remain unaccounted for even in 2011. There is an overwhelming amount of people in the same situation with the same stories and same restrictions that burden them. It makes me wonder about the state of America.